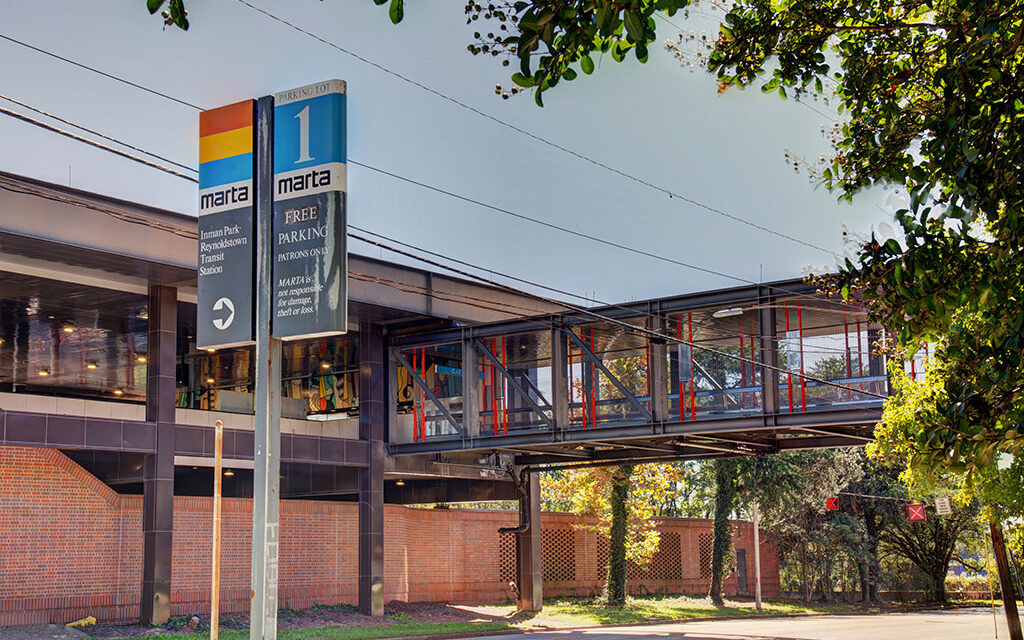 The Metropolitan Atlanta Rapid Transit Authority (MARTA) Inman Park/ Reynoldstown station, located on DeKalb Ave. and Hurt St. in Atlanta, serves approximately 3,000 people every day. When the neighborhood station originally opened in 1979, its pedestrian bridges and walkways featured Chicago Metallic® metal ceiling systems. After 40 years of continuous use, the station was ready for an update. Based on the ceiling’s reliable performance, MARTA once again selected Rockfon’s metal ceiling systems as the basis of design for the station’s renovation. 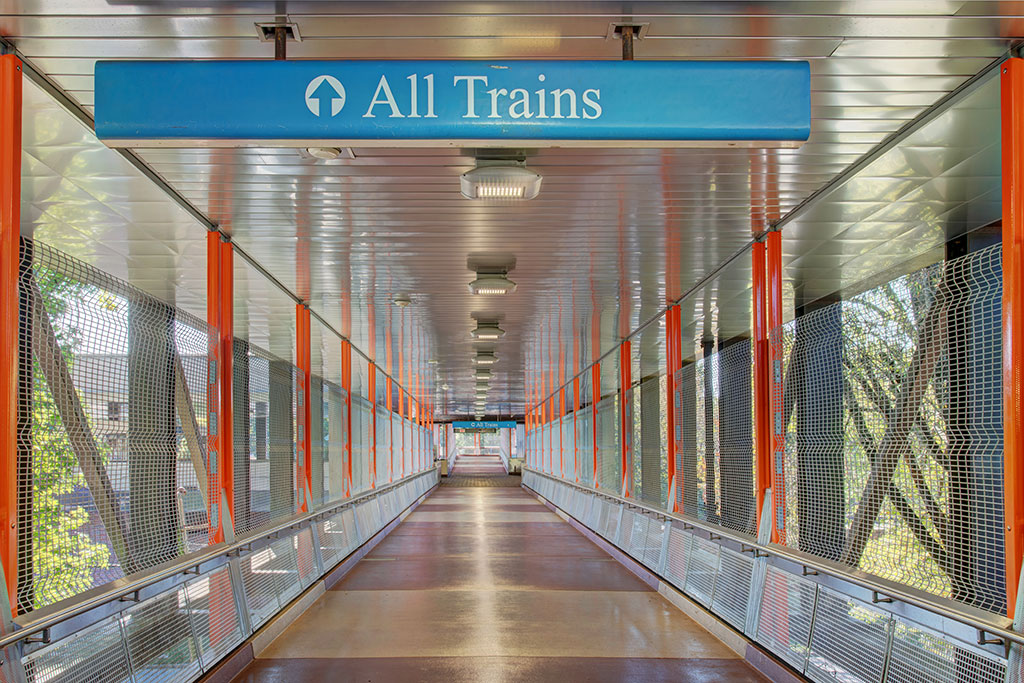 “There was a lot of collaboration on the front end to ensure we retained MARTA’s design intent,” said Carlo Grohovac, Rockfon’s architectural and district sales manager for Georgia, “We sat down together a year in advance of the on-site renovation work. I said, ‘Tell me what you want and we’ll do our best to make it happen.’ What they wanted was to meet the performance requirements, dress up the look, while keeping the costs down.” 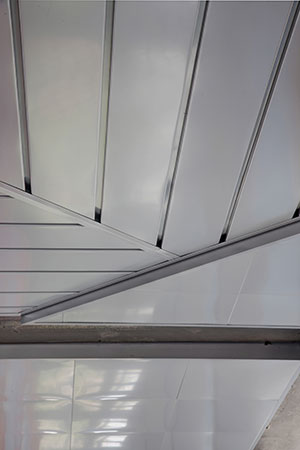 Because the metal ceiling system extends across both exterior and interior spaces, it also was tested to meet the project’s air and water performance requirements for Atlanta’s warm, humid climate.

Metal does not absorb moisture and does not support the growth of mold, mildew or other potentially harmful microorganisms. Rockfon’s metal ceilings are low maintenance and fully recyclable at the end of their use on the station.

“Using two systems, factory-finished in Satin Silver and Winchester Gray, perforated and non-perforated panels and multiple sizes, we were able to combine standard design elements for a high-end look without a high-end cost,” said Grohovac. “The variety of color, sizes and shapes helps break up the long corridors and offer visual cues to passengers.” 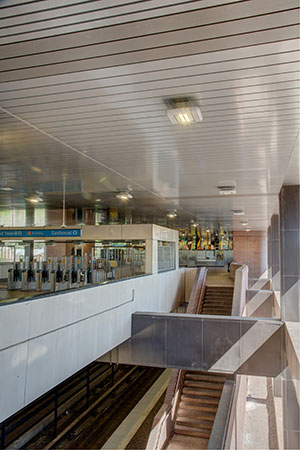 He continued, “MARTA wanted a smooth, symmetrical look throughout the transitions and perimeters, such as where the ceiling has a 45-degree angle, or where it meets a column or soffit, or where all three conditions intersect. We arrived at elegantly simple solutions and they look beautiful.”

Rockfon custom-engineered and fabricated the ceiling’s secure access panels and technical panel attachments using pre-cut panels and channel molding. “These attachments uniquely highlight our attention to even the smallest detail within the big picture of this project,” noted Grohovac. “They smoothly incorporate the adjacent ceiling materials, often in two colors, and seamlessly frame the fixtures for the new fire protection system, security cameras and LED lighting.” 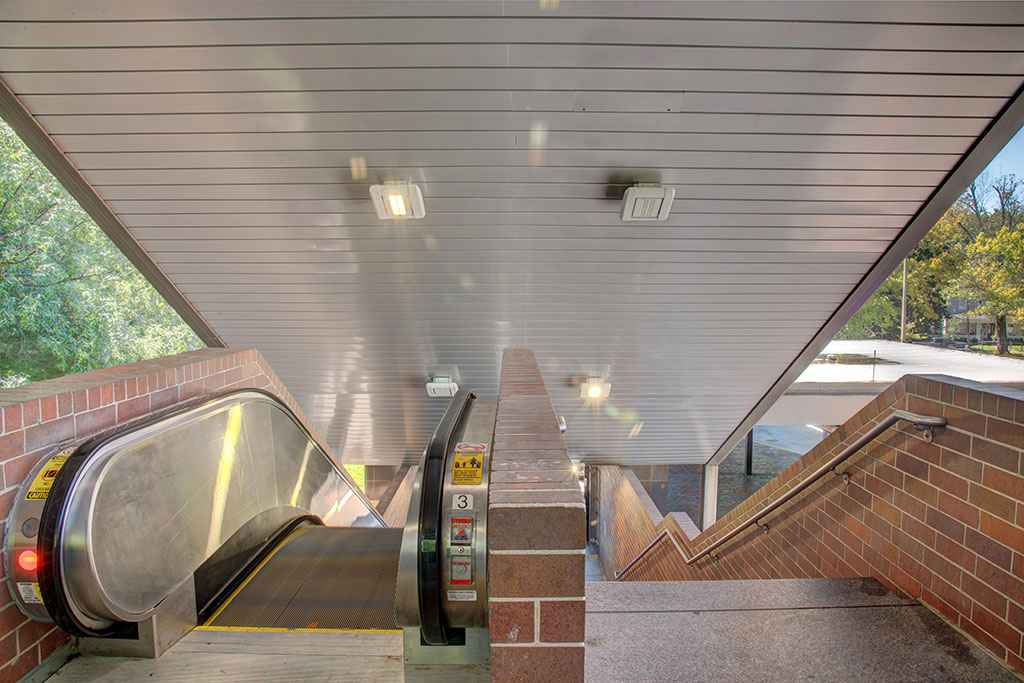 Minimizing disruption to the passengers at MARTA’s Inman Park/Reynoldstown station, Acousti carefully managed its work while the station remained in use throughout the renovation. Work began in December 2018 and was completed on time and within budget for the April 2019 re-opening celebration at the Inman Park Festival.

The Inman Park/Reynoldstown station was the first major project to be funded by the “More MARTA Atlanta” (now MARTA 2040) plan, representing the region’s largest transit investment in more than four decades. Approximately $2.7 billion of the funding was generated by a half-penny sales tax approved by city voters in 2016. According to the American Public Transportation Association, studies have shown that every $1 invested in public transportation generates a $4 economic return to a community.

The More MARTA Atlanta plan was designed to improve transit services in historically underserved communities, increasing access to employment centers throughout the city of Atlanta. After two years of public engagement, technical analysis, system planning and project list refinement, the MARTA Board of Directors approved the More MARTA Atlanta program on Oct. 4, 2018.

“In Atlanta in the 21st century, transit is the lifeblood of opportunity,” said (2018) board chair Robert L. Ashe following the program’s approval. “It is how millions of Atlantans access jobs, school, health care and move throughout their communities. Today, we together took an important step in building the Atlanta we want for decades to come.”

Along with aesthetic updates to the Inman Park/Reynoldstown station, its new safety features include an accessibility ramp connecting Walthall Street to the Reynoldstown bus loop and a stair tower to Seaboard Avenue on the south side of the station. The station is the closest train station to Little 5 Point’s restaurant and retailers, and is near the Edgewood Retail District, the Krog Street Market, the BeltLine Eastside Trail, the PATH Stone Mountain Trail, historic sites and more.

Atlanta’s investment in MARTA’s transit services and stations not only ushered in improved connectivity, accessibility and mobility, but also heralded significant economic development opportunities across the city – and the region – in the years ahead. The Atlanta Regional Commission forecasted that by 2040, the region will see an influx of 2.5 million new residents, making Atlanta the sixth-largest metro area in the country.

About Rockfon
Rockfon is part of the ROCKWOOL Group and is offering advanced acoustic ceilings and wall solutions to create beautiful, comfortable spaces.

At the ROCKWOOL Group, we are committed to enriching the lives of everyone who experiences our product solutions. Our expertise is perfectly suited to tackle many of today’s biggest sustainability and development challenges, from energy consumption and noise pollution to fire resilience, water scarcity and flooding. Our range of products reflects the diversity of the world’s needs, while supporting our stakeholders in reducing their own carbon footprint.

Stone wool is a versatile material and forms the basis of all our businesses. With approximately 11,000 passionate colleagues in 39 countries, we are the world leader in stone wool solutions, from building insulation to acoustic ceilings, external cladding systems to horticultural solutions, engineered fibers for industrial use to insulation for the process industry, and marine and offshore. 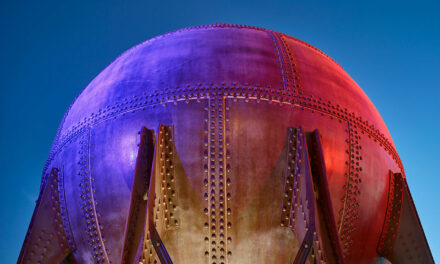 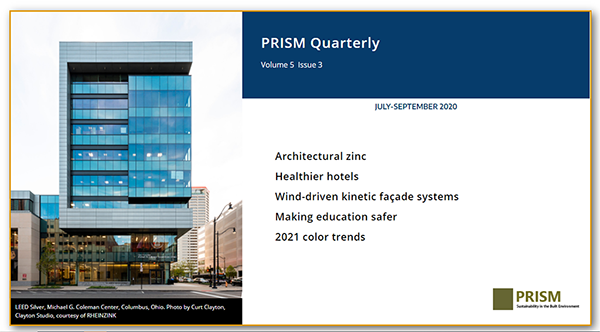 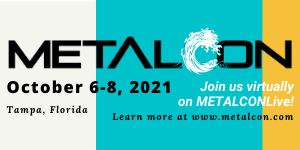