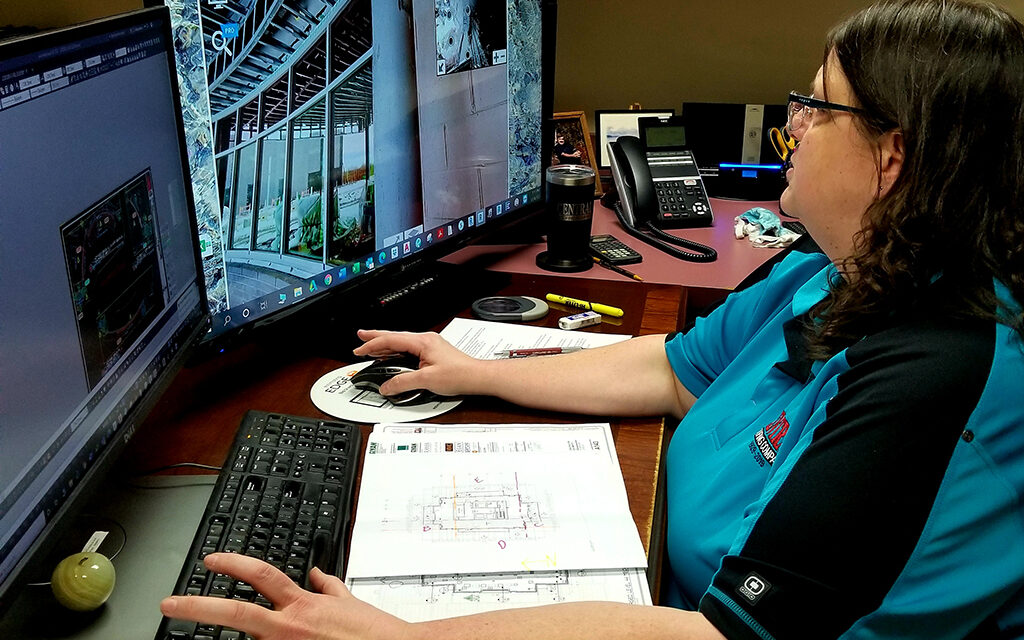 “She knows what she’s doing. Make this happen.” Those were the words that changed Cindy Hillegass’s career … and brought her equality in the construction industry.

In celebration of Women in Construction Week last week, Hillegass shares her story of moving out of drafting jobs that provided only an average $.72 salary increase over eight years to fairer compensation and recognition.

“The job market for women in the 1990s was not one of equal pay for equal hours,” says Hillegass, a resident of Plymouth, MN. “The construction industry excites me, but being a female, it’s been a long climb upwards. From 2004 to 2014, my salary increased just an average of $.80 each year.” 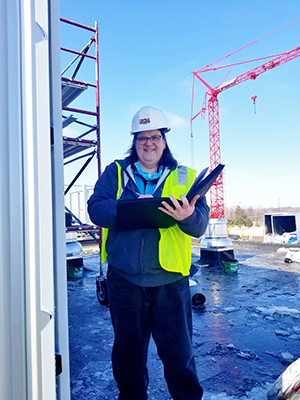 Realizing the only way to advance in the industry and gain equal pay was to gain more education; Hillegass earned her MBA and Master of Management of Information Systems degrees. She also has a Graduate Project Management Certificate and Systems Analysis and Design Certificates. With all those credentials from Metropolitan State University, her talents were recognized by her employer. After more than two decades in the construction industry she was finally promoted to a managerial position with equal compensation.

“It took 22 years for me to break the glass ceiling,” says Hillegass. “However, it wasn’t until I interviewed for a position at Central Roofing Company in 2018 that I felt truly valued.”

During an interview with Warren Stock, COO and senior vice president of Central Roofing Company, Hillegass showed him her portfolio of work. After what she says was the shortest interview of her career, Stock looked at an associate and said, “She knows what she is doing. Make this happen.” Those were the words that launched her career as a Senior Production Technical Drafter IV for one of Minnesota’s largest commercial roofing companies.

“Drafting is hardwired into my DNA,” says Hillegass. “From a young age, I’ve always been intrigued with the construction industry. Now I’m living my dream job.”

Graduating as just one of three females from the Architectural Drafting and Estimating Program at Dunwoody Institute in Minneapolis, Hillegass advanced quickly in the industry. Unfortunately, compensation, female role models and opportunities for females were less than impressive during her first years in the construction industry.

“Working women, like any other male employees, want to contribute to the success of a company while having equal opportunities,” says Hillegass. “When I started at Central Roofing I finally felt valued.”

With her extensive and ever-increasing drafting knowledge, Hillegass creates drawings and plans for submittal when Central Roofing is bidding on a commercial project job. These documents include instructions for how and where roofing materials are to be installed. Additionally, she creates tapered insulation plans and details to ensure the proper flow and drainage of water from the roof. As jobs progress, her drafting skills are required to make changes, updates and as-built plans for project managers and the production crew. 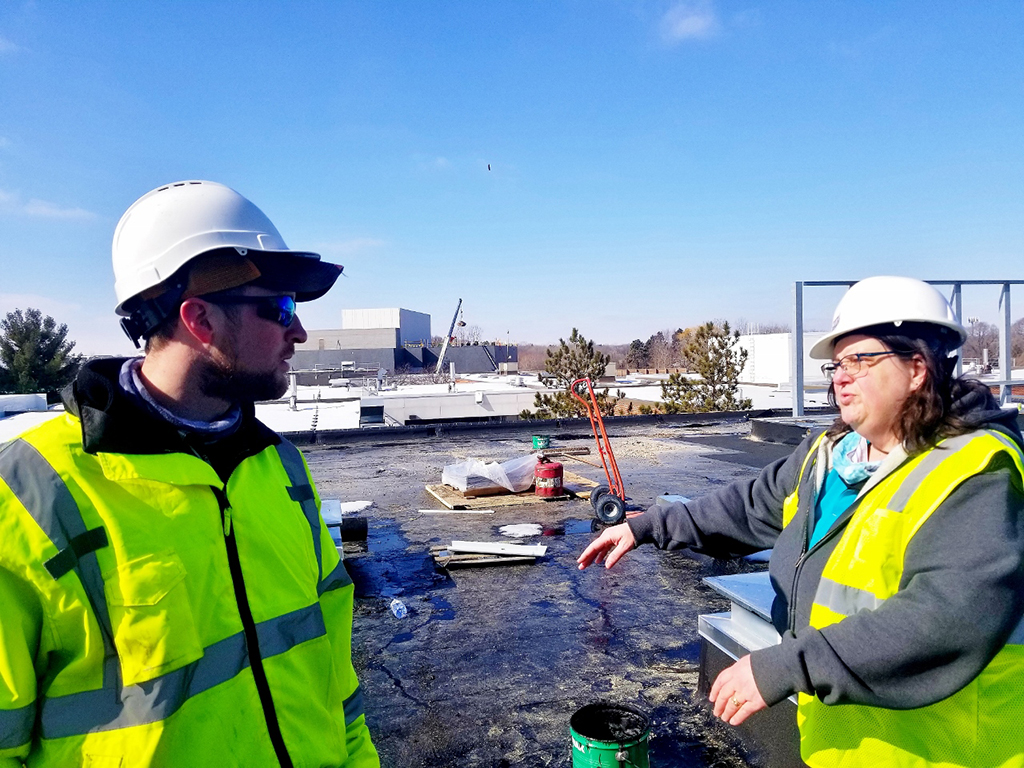 Due to the continuous work load, Hillegass and her associate, Mick Lathe, juggle many project requests simultaneously. Some take several days to complete, others several weeks. Her current detailed work on drafting the new roofing system for Eden Prairie Central Middle School brings value to the overall project.

“From day one Cindy immediately jumped into the details of this project,” says Kyle Forrey, project manager with Knutson Construction. “This school has multiple areas where the new roof ties into an existing roof. These are challenging plans. Cindy’s drafting capabilities, paired with her construction knowledge, have made her an invaluable resource. She’s helping solve problems related to the scope of work for Central Roofing and also to adjacent trade workers.

“There is no doubt in my mind that the work Cindy puts into the project up front pays dividends to the install crews later on in the process. She helps remove many of the roadblocks that can slow down productivity.”

On another project, a large commercial addition onto the corporate campus at Boston Scientific, the construction crew also relied on Hillegass’s talents.

“Cindy provided an endless amount of suggestions for us to work through on this challenging project,” says Catie Kilpo, assistant project manager with Mortenson. “She came up with innovative ideas that made production in the field simpler for Central’s crew without sacrificing the quality of the product. 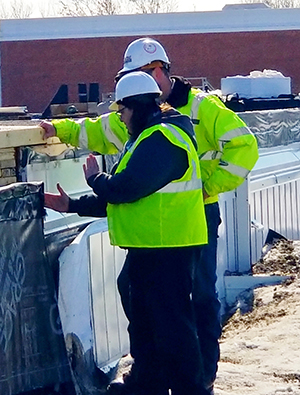 “There’s no doubt Central Roofing puts together one of the most detailed design plans I have encountered. I had complete confidence in Central Roofing’s installation because of the documents that Cindy completed.”

As a woman in the construction industry, Kilpo relates that she’s also worked hard to find a place at the table. “As time changes, technology changes, and the workforce changes,” says Kilpo. “Women will continue to find space in whatever areas of expertise, job title or position we encounter. The door has opened wider now for women … and we’re going to keep it open.”

For Hillegass, one of the key benefits to working at Central Roofing is that it’s a female-owned business.

“Finding women in leadership roles in the roofing industry is improving, but it’s still rare,” says Hillegass. “I believe the largest difference is female-led companies have more of an inclusive, rather than exclusive, work environment.

“Gerry Stock, our President and CEO, brings empathy to the company. Her leadership has proven key in attracting and retaining the industry’s most talented people. Gerry makes people feel comfortable and valued. She’s become my role model and mentor.

“This company embraces the basic human need of inclusion. It’s a true family. I’ve learned here that it’s not your title that defines you; it’s your work ethic and output. Teamwork is the norm here; the company focus is unified and supportive.

“I wish for every female in the construction industry what I’ve found at Central Roofing. There’s gender equality here. It shows in the way people are treated and in the paycheck. Best of all, there’s opportunity for growth in a company thriving in technology advancements. This is the dream job I’ve always hoped would exist for me.” 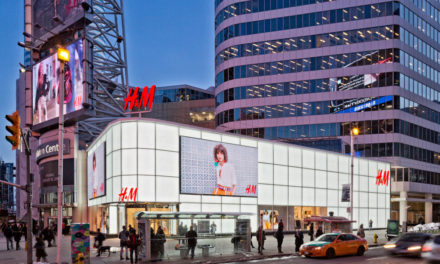 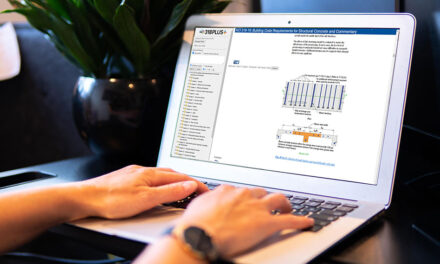 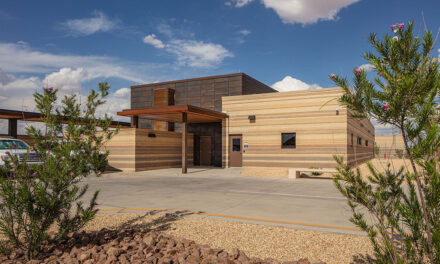 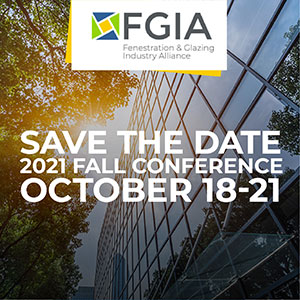